When You Use Too Many Drugs 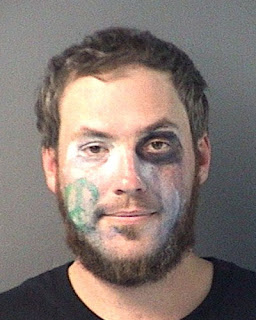 This is what we know.  This guy.....Jeffrey Scott, of Occupy Pensacola fame, got arrested for robbing his neighbor's house.  The deal involves Jeff sneaking into the house, and stealing the guy's furniture, which he ended up taking to the Occupy camp site over at Pensacola's city hall area.

The collection of furniture?  According to reports out of Pensacola: a couch, a recliner, four wicker chairs, and four couch cushions (the Escambia County Sheriff’s words).

I read through this whole thing.  It is comical in a way.  Jeff says he would have brought the stuff back.....eventually.  No mentions drugs, but I suspect that Jeff has done wide assortment of drugs, and probably doesn't remember that much about taking the wickers chairs and such.

I've noticed over the past thirty years that real job titles have gotten all goofed up.  Agricultural engineers are often farmers.  Military scientists are often Marines with a rifle.  Economic theorists are often idiots who barely graduated from Princeton.

So....the bottom line here....Jeff is sitting in jail and needs bail.  One of his relatives will drive down and probably help Jeff out.  The relative will ask Jeff what he was thinking.  Jeff will just grin, because he probably doesn't remember much.  By Saturday, he'll be back at the Occupy camp....doping up again, and back into trouble within two weeks.  It's a sad life, but it's the only thing he enjoys.
at Monday, November 21, 2011 No comments:

Not That We Really Needed It

Word comes out of Germany this morning that some musical guys are coming together to create "Rocky", the musical.  Naturally, the Stallone dude is in the midst of this.  It'll be held up in Hamburg and replace one of the current musicals being performed.

I sat and pondered over this.  Two hours of some Rocky character....singing his guts out on the stage.  Some girlfriend, some trainer, some promoter....toss in the opposing boxer, his trainer....a dozen midgets....some Mafia characters....and maybe a ESPN boxing analyst, and you've got yourself an opera of sorts.

Some questions remain.  Would you pay $50 per person to watch this?  Would you be willing to attend this with your wife or girlfriend?  Would you ask the guys in the office to hang out with you while you watch it?  Would you get goosebumps and start weeping when Rocky sings his big tune at the end of the whole show?

I can see the day coming, when we have Rambo the Musical, maybe Santa the Musical....perhaps even Auburn versus Alabama Football the Musical.  Personally, I think there is something wrong here, but I'd best just keep my mouth shut.
at Monday, November 21, 2011 No comments: