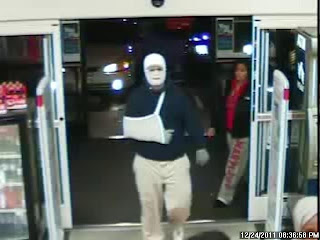 We are always a bit odd here in the DC area.  The cops are on the look-out now for a robber who hit a local drug store.  The guy walks in....all bandaged up....to include his face and head.  He demands drugs, not cash.  He gets his pain-killers, and walks out.

For creativity....I'd give the guy 5-stars.  But if he's only doing this for $200 worth of pain-killers, it's not much of a deal and you risk a couple years in prison for almost nothing.  The sad thing is that the pharmacy gal could fake you out and give you some kind of special bowel-movement pills instead, and you'd be sitting on the toilet all afternoon.
at Wednesday, January 04, 2012 No comments:

About every two weeks.....I'll blog a moment of something with our local subway system here in DC.  I'll admit....it is a huge operation and it would be a miracle if it ran perfectly.  The curious thing is that little episodes pop up that always amaze you.

Someone brought this up today.  There are METRO parking lots where you drive in....park your car....and ride on into DC or wherever.  Naturally, METRO charges for this parking.  You typically pay in some fashion, usually by swiping your card.

So this interesting episode starts at the end of the day....and the exit machine won't read your card.  So there is this guy at the gate and he has these forms.  As you drive up to the gate....you have to fill some blocks out.....telling why you should exit without paying.  You explain that forms are a waste of time and just raise the gate.  He refuses, and forces you into looking at the forms.  You can figure there is probably about sixty seconds of thinking and quickly jotting these things down....name, address, phone, and reason for exiting without paying.

Now, you can also imagine forty-odd cars lined up to leave and each one having at least two minutes involved in this game.  No, the guy doesn't hand these out to folks in a row....he waits for each driver.  You can also imagine the hostility of everyone....this being the end of the day.

I sat and pondered over this.  It's paperwork to explain why METRO had to allow a free exit....but where does the form go?  Does it get put into a vast warehouse of cabinets where thirty-two million other METRO forms reside?  Who reads this form?  A $70k a year employee who analyzes why sixty cars exited freely at one parking lot?  What if the driver lies on the form and signs it as "B. Obama"?

Behind all of this....with all the various issues and complaints....I have come to suspect that METRO has a strategy in place.....to convince fifty percent of its riders to just give up and drive into DC.  I realize this is a bit extreme....but to have almost daily events occur, where stupid accidents occur, or escalators fail continually...you have to believe that a bold strategy is in place.

Just another day in America.
at Wednesday, January 04, 2012 No comments:

Back around the second week of December....I felt Newt had the game all fixed up in Iowa.  Instead, here is Romney and Santorum running down to the final hundred votes.  The confidence level still isn't good over who won, and there will be some recounting over this episode.

How does Rick Santorum suddenly arrive?  Amongst the dozen factors that you can ponder over....there is this "Reagan-factor".  On a scale of one to ten....which guy looks and talks mostly like Ronald Reagan?  And Santorum gets almost a nine on this curious factor.  He's not great at debates, and he doesn't have a long list of accomplishments in life.  But if someone had a memory of what made Reagan interesting....then'd he'd probably look at the things that Santorum says.

As for New Hampshire?  Rick Perry is virtually finished, and I doubt that Bachmann can survive another week of operational costs.  Newt might still be able to win New Hampshire (he was tossing lots of capital into the campaign there).

So on we go.  Looking for someone who might look like some B-movie actor-turned-California governor, who impressed enough Republicans and a few Democrats.....and created this fantasy period of the 1980s.  We'd all like to repeat that experience, for some odd reason.  We'd all like to go back to the Fleetwood Mac and Super Tramp era, and do it all over again.
at Wednesday, January 04, 2012 No comments:

Some smart guys sat down and figured out the diet of our ancestors.....Caveman Joe.  Naturally, they then listed all the possible foods that Caveman Joe ate, and then had some tests with real people.

The items?  Well....Caveman Joe ate mostly fish and some fairly lean type meat....figure chickens and birds of various varieties.  He also ate seasonal vegetables and fruits.  And he probably ate a good bit of nuts (unsalted of course, and rarely if ever....roasted).

The diet folks have examined this and generally found that the test players generally fixed up some blood pressure issues and this turned out to be a good decent diet.  The negative?  Well.....no wheat products (bread, etc).  Beans didn't get included in this listing....mostly because it would have been difficult to cook the beans without the right pots.

Caveman Joe also didn't have dairy cows standing by to provide milk....so calcium wasn't a thing that he came by naturally.

All in all....Caveman Joe would have been a lean kind of guy and maybe a bit healthy....but if you throw in various predators, snake-bites, and long winters with possible food shortages....then he really had some problems in surviving.

The comical side of this is that a number of folks are walking around and talking up this ancient diet for folks.  They are making Caveman Joe's diet sound swell and thus convincing folks to go extreme.  There are some factors that folks miss on this though.....Caveman Joe didn't have tobacco to smoke, beer to drink, or fresh strawberries from Honduras flown in to eat each week.  He used what he had, and nothing more.  You didn't gain much weight because there weren't alot of sugar products around and almost preservative-type foods sitting on the shelf there in the cave.

I think's nifty how we have all this awesome brain power just sitting around these days and actually thinking about odd things like this.  Maybe eventually....they might even figure out how Caveman Joe made up for a lack of soft toilet paper or nightly entertainment.
at Wednesday, January 04, 2012 No comments: