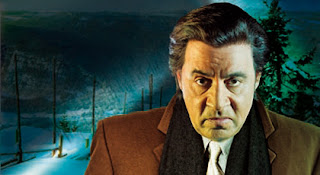 So this is the story.  Frank has been a mob guy all his life.  Things have gone wrong, and Frank has some different prospectives than what he had twenty years ago.  He has grown some feelings, some humanity, and perhaps matured a bit in his older years.

Frank has decided to stand against the mob and say some things to take them down a notch.  After the court case is done....Frank needs to be "relocated".  Typically, this means you get sent off to Arizona, Idaho or some remote sections of Maine.  Frank has been watching the winter Olympics at the time, which featured Lilyhammer, Norway.  Franks says to the relocation guys....that he'd like to relocate to Lilyhammer.  In a real location scenario.....you can't be sent out of the country....it just won't happen.  But in this script, they comply.

The start-up of this Norwegian TV mini-series stops at this point, and you get the idea of who Frank is.  Yes, it is Steve Van Zandt who is playing this Norwegian TV series character.....our guy from the Sopranos.  Who else could you have playing a Jersey mob guy?

According to Norwegian news....over half the adult population watched the first of these episodes in the past week.  This has excited the network who produced the eight episode series.  But here's an interesting side to the story.  The network knew they had a masterpiece....so they signed a deal with NetFlex, and you can download the series in the near future.  I'm predicting that around three to five million Americans suddenly discover that various European productions are worth watching, and this trend toward more unusual stories like this occurs.

The icing on this cake?  What you should know about Frank and his arrival in Lilyhammer.....a kind of rural area of Norway.....is that he eventually comes around to realizing that his old Jersey methods....might be required in Norway.  You can move a Jersey guy to Norway, but you can't take the Jersey out of him.