It's one of those sad stories that you'd prefer not to dwell much on.  Some Bama kid....nine years old....takes a candy bar from Grandma, without asking.

The kid is caught on this stolen candy bar.  Grandma wants her to run up and down the yard as punishment. The step-mom (pregnant and later after the arrest delivers her kid) comes into the picture....and this up and down the road routine turns into three hours.  The kid gets dehydrated, and eventually dies from exhaustion.  Cops say that she had a bladder issue....and that the chocolate bar probably was a pretty bad thing for a person like her to eat.....and could have contributed to the issue.

Cops come out today....admit the husband of this step-mom....told them a couple of years ago that the wife was bi-polar.  Cops have arrested both the Grandmother and step-mom.

There's not alot you can say here.  Most kids probably would have run around the yard and eventually just started to jog, and maybe reach a point where they were walking.  This kid apparently never went into the normal behavior mode.  The kid might have had some behavior episode, or been a candidate herself for being bi-polar.....you just don't know.

The bad thing here is that the county prosecutor will bring serious charges.  Most juries in the state of Bama will take this serious, and I suspect that one of the two women are going to do twenty-plus years.

Some bi-polar folks can put together a lifestyle and avoid alcohol and drugs.....and never hurt or harm anyone.  It's a small group though....the rest?  They aren't to be trusted....under any circumstances.  They'd kill your kids, your dog, or your neighbor....just because they felt that way.
at Thursday, February 23, 2012 No comments:

It's not the kind of thought you'd like to hear, but we are on this plank....where gas will likely go past $4, and likely past $5 by the end of summer.  I'd prefer not to imagine this scene of $6 a gallon, but here are my observations.

First, you can forget about teenage kids getting any kind of increase on their $80 a month gas money.  Somehow....you will have to figure out a way to stretch those thirteen gallons of gas as far as possible.  Friday evening dates with Jimmy Junior won't happen.....accidents with teenagers dying on some bridge will decrease.....and there might be a few less pregnancies that folks might notice.

Second, airline travel will become a difficult thing to estimate.  Every airline will toss on a $50 fee for fuel, and overseas flights will figure some $200 fee wording.

Third, places like Vegas or Orlando.....will suffer because folks won't fly or drive to the location as much.

Fourth....that SUV that you bought four years ago?  It'll be traded in and be practically worthless.  Some guys will be smart enough to buy two or three Ford Explorers and just park them in the barn.  He'll use one till it's completely dead, then crank up the next and drive it for a couple of years. SUVs won't be dead....but it'll be the guys who have a $60k a year paycheck who mostly drive them.

Fifth.....groceries will edge upward and everyone will wonder why gas has an impact.  Farmers will shake their heads over their fuel bill doubling.

Sixth.....schools will look for hundreds of ways to talk folks into accepting four days of school a week....to save on bus fuel money.  This will mean nine-hour days where a kid arrives at 07:30 and doesn't leave school until 5PM.  The three-day weekend?  Well....it'll take a while for folks to figure out how to make these work.

Seventh.....the various fees that schools will toss on folks....will eventually include a bus fee.  You will laugh over this and suggest it's a joke.....but it'll happen.

Eighth....as gas edges higher....folks will eventually realize the state and federal tax established on each gallon....simply makes fuel more expensive.  Some political folks will have to stand up and explain why this is such a good idea.  My guess is that they've got a limited future.

Ninth....when the pizza delivery guy says your delivery fee is around $5 a pizza.....you will start to compare the actual pizza cost of $9 to the fuel cost.....and just forget about ordering pizza.

Tenth, and final....sports teams....from high school to professional level....will all begin to add up the cost of taking players around the region, state, or country.  We will eventually have to change a number of things, in the interest of sports.
at Thursday, February 23, 2012 No comments:

The Problem with Speeches 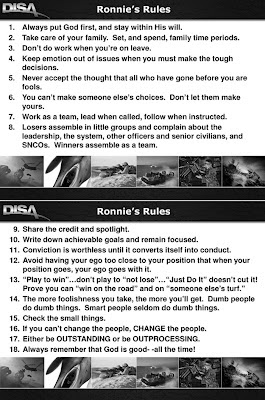 This is an odd story to tell.  I work for this organization within the Pentagon structure....DISA.  I actually work for an operational part of it.....not the headquarters itself.  We recently had this turnover with the old three-star general leaving, and the new guy arriving.  I've actually met the new guy on two occasions, and found him to be a pretty straight speaker and gets to the point....which is something I tend to appreciate here in my older years.

The new guy had his fireside speech last week.....it was a dynamic VTC type thing where folks over at the HQ's were able to walk in and the rest of us were just supposed to watch it via our computers and this fancy VTC ability on each CPU (more on this later).

The general was going to introduce himself and had an audience of a couple hundred folks from the HQ's building.

So at some point, he puts up two slides....."Ronnie's Rules", which kind of tell his basic rules of life and how you ought to view him.

They kinda lead off with a God-bullet.  In the military, over thirty years of association, it tends to come up once in a while, and nobody much says much of anything.

Well.....some two-dozen-odd folks in DISA apparently took some heartburn with this God-business (if you look at slide one and two.....it was the first rule, and the last rule....so folks kinda absorbed this (some in different fashions).  So the two-dozen-odd folks ran off and got some anti-religion group involved, and right now want the three-star in a court-martial.  This pretty much went from first gear to fourth gear in just a week's time.  It got into the Huffington Post, the CNN news, and even the Washington Times.

The jest is.....you just shouldn't have government officials running around and telling you to get good with God or Jehovah or Muhammad or whatever.   But the flip side of this is a bunch of folks have turned a 1-star event into some media circus and dumped on some military executive guy who probably intended this to be a positive feel-good speech of his.

There are three observations I'll make about this.  First, you would have thought some Major or enlisted guy would have been there to look over his slides and just told him honestly to tone it down a notch or two.  There's a way to say what he mentioned, without ever upsetting any folks of any type.  It never hurts to have someone to just read over what you wrote....to make sure you don't really screw up too badly.  Maybe it happened in this case.....but I kind of doubt it.

Second, on my list of four hundred things that a boss or director could do to upset me....this doesn't really come up near the top, middle or bottom....it'd be like number 846 on my list of stupid things the boss could say or do.  In fact, I suspect the vast number of folks I work with.....probably didn't even think about the obvious mention of God or religion.  These two-dozen folks?  I'd like to think they had good intentions....but I'm kind of wondering where those intentions are and where the intentions lead to.  I can think of a hundred negative qualities of leadership that I've seen on the past thirty years.....and I'd prefer not to make them popular or standard amongst the bosses I work for.

Third, and final....we in the military world live in a pretty threatening world.  A military guy has a higher chance of dying than most civilians will ever realize.  So military guys tend to think about their demise or ending.  They'd like to have higher odds.  They'd like to have someone up there....looking over their life and giving a five-percent higher chance of surviving.  Military folks would like to finish up a one-year tour in Afghanistan, and kiss American soil when he arrives back, and silently says some prayer to someone for getting him back to Texas, Miami, or Red Bay, Bama, in one piece.  I wouldn't be blaming the general for his comments....he probably has appreciated higher odds like most other military guys.

The comical side of this is that this fancy VTC capability that these jokers at the HQ's have bragged about for two years, and mandated us to be trained on.....barely works, if ever.  I actually missed the entire VTC and the God comments....because I consider any attempt to run the VTC to be a waste of my time.  Most folks I work with....kind of feel the same way.  So I'd like to think that the chief reason why nobody in my organization joined up with the two dozen headquarters folks on the complaint....was because we didn't have a problem with the comment.  The truth is....we probably skipped the VTC.

How this ends?  Leon (our Pentagon chief) will ask someone to waste a hundred man-hours and review the episode.  Lawyers will ask the general what he meant.  Some social scientist will ask the complaint folks how they feel.  Eventually, Leon will ask the general to put out an apology of sorts, and regret the comment for upsetting folks.  Then Leon will close the episode.  The general will do what a good executive has to do on occasion, and live with it.  The rest of us, will utter a moment of thanks to the good Lord.....for ending this stupid episode, helping Leon find the right ending, and end the torment for a few souls.  Life will go on....thankfully.
at Thursday, February 23, 2012 No comments: