When You Run With the Dogs

We have an expression in the South....you either run with the dogs or stay up on the porch.  This week....Abu Mansoor Al-Amriki apparently came to violent end, because he just couldn't run with the dogs.

This is a simple story of sorts.  Abu Mansoor Al-Mriki was in reality.....a kid from Alabama.  He grew up down in the Mobile region....from a Baptist mother and a Syrian Muslim father.  Some folks from Bama would say that this was situation bound to go bad.

All throughout high school in the Mobile area....Abu really wanted to identify himself as the outsider.  He readily identified himself as a Mulsim in a southern environment.  You can imagine a character like this.....never really identifying with the local guys....always having to be different.

Days passed, and Abu eventually finished up high school and ended up at the University of South Alabama.  He did two years and then left.  No one ever talks much over that two-year period.  My humble guess is that he continued the "outsider" routine.  He probably wanted to always be different.  The problem though....this was after 9-11, and in Bama.....a staunch Muslim outsider idiot wasn't going to be respected in any fashion.

Abu left and went off to Canada.....when he met some Somali gal and married her.  They could have quietly sat in Canada and he probably could have lived a pretty good life.  But he just couldn't be regular or normal.  So he eventually took his Somali wife and went to Egypt.  I'm guessing at this point, he was still acting as the outsider....an American Muslim guy....but this time around, he just wasn't getting much respect from the Muslims.....mostly because he was young, immature, and had some outsider attitude.

Abu left Egypt and finally settled in Somalia.  The we can say....by 2007....he was an American Muslim sitting in Somalia....conducting jihad activities....and talking up his war on non-Muslims.  At this point, the intelligence guys finally put Abu's name up on the wall and considered him a threat.  The great fear was that he would represent this young punk attitude in the Muslim world, and potentially recruit other Americans eventually.  He was a threat.

For the past five years....Abu made videos.....Abu made threats....Abu got attention.  Along the way, some older Muslim guys in Somalia determined that Abu was disrespecting them and their authority.  You can't have some punk Muslim kid from Mobile, Bama move into your neighborhood and suddenly get status.  It takes years and years in Somalia.....to be someone in the Muslim terrorist world.  Abu had violated several unwritten rules.

So this past week....based on reports.....our Mobile native terrorist, Abu.....met with foul play.  In fact, as the story goes....he was beheaded.  I'm guessing here, mostly because they haven't found a body yet....that the American Muslim kid was dumped in some ditch in Somalia.  A sad end to the outsider, who was always the outsider, and died the outsider.

A chapter in Bama history now closes.  We had contributed some punk kid into the Muslim world.....who made it onto the top ten bad boy Muslim list.....and the only thing that really remains of him now, is a Wikipedia mention.  Nothing else.  And that's a sad end to kid who could have gone in a different direction, or just sat on the "porch".
at Tuesday, April 17, 2012 No comments: 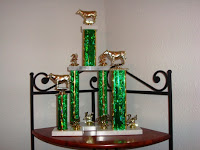 In the old days.....if you were a NCAA football championship winner.....you ended up with a real trophy.....like the one you see here on the right.  It was always big and gaudy.  It had character.  And it was fairly tough. You could bang it around a little, and it'd be ok at the end of the day.  Guys admired trophies like this. 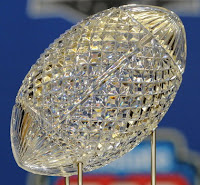 So the NCAA came along and decided that the old fashioned trophy was not acceptable.  They had a long chat about this.  Some research was done, and they selected a fancy crystal football trophy as the national hand-me-out.  It couldn't be cheap.....so the NCAA was willing to spend over $30k for this crystal trophy.

The thing about crystal trophies.....they tend to break.

This past weekend....the folks down in Bama came to discover this.  They had a function, and some guy tripped over on a rug (you can imagine the scene)....fell against the case where the 2011 NCAA football crystal trophy was held, and it fell.

Steinbeck would have written this up: "A quietness filled the room.  Utter horror fell upon every breathing soul.  Terror filled every single mind".

Some Auburn guys would have just winked around the room....not wanting to claim they had scrunched up their carpet or such.....but they might hint this later.

The university folks are quickly moving to fill the void.  My humble guess is that they will hustle up another crystal football from some guy named Arnie, who secretly buys them from a Bombay company that found a hidden cave in the Himalayas where crystal football trophies sit in the thousands.  This time around....they will attach the trophy with carpenters glue to some fancy oak board on the wall, which will have forty screws holding it tightly there.

At the end of the day.....the worst you can say.....is that some guy is fairly embarrassed over tossing the 2011 NCAA football crystal trophy, and will be bothered over this for the rest of his life.  My advice?  Don't worry about it.  Bama intends to win a dozen such trophies over the next decade, and the only thing hindering them from accomplishing that....is that agricultural school to the south of University of Alabama....that occasionally recruits 5-star players.....that shall remain nameless.
at Tuesday, April 17, 2012 1 comment: