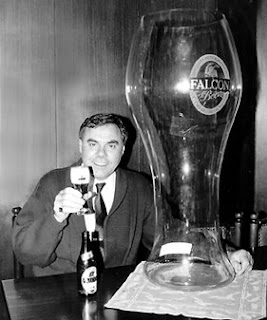 This week, if you've been following the news.....New York City is discussing the possibility of making large drinks and beyond....illegal.

What the mayor says...is that a vast amount of sugar is being consumed by the population on a daily basis.....as we easily consume 20 ounces of soda easily. Walk into a 7-11 and buy a 40 ounce Coke daily, if you desire.

The mayor says....we are killing ourselves.  So he intends to stop this action.

I sat and pondered over this.  When I was a kid (1960s), sodas came in bottles and you had two glass bottle sizes (from 6 ounce up to the 10 ounce).  At some point, they brought along the big huge bottles for economic value, which were in the 20 ounce range.

Then the cans came....with 12 ounces.  Then they went back and re-invented various other sizes.

We've accepted this, and 40 ounces of soda in one afternoon really isn't a big deal.

So I started to think about this.  For forty years, we haven't really changed our view on the typical size of a beer bottle or a beer glass.  Why not?  Somehow, the Pepsi and Coke guys convinced us that going from one single 6-ounce bottle of soda to a 40-ounce cup of soda....was no big deal.

For those of you....really irked by the mayor of New York....please come to my rescue.  I'd like to start a new trend for beer glasses.....the 120-ounce beer glass (as seen in the picture).  There should be nothing wrong with a guy sitting down after work and consuming just one big glass of beer.

Come on....you've easily accepted the idea of drinking down one or two 40-ounce cups of soda....maybe daily.  So why can't the beer guys get the same deal?  It seems like we haven't really looked at the big picture.

It came out this week….that the Gitmo guys were definitely using kid’s tunes as a “disincentive” with prisoners. To make a point about this….Al Jazeera this week (our favorite Middle Eastern news source)….did up a documentary called the “Songs of War”.

Naturally, there’s this guy who wrote music for Sesame Street, who found out his tunes were used for the Gitmo project. Christopher Cerf…..was a bit upset….talking about the horror of his music used for evil purposes.

So we go back almost a decade when some guy….in an anonymous sort of way….noted that Gitmo prisoners really couldn’t take continuous Sesame Street music. In his words… “If you play it for 24 hours, your brain and body functions start to slide, your train of thought slows down and your will is broken. That’s when we come in and talk to them.”

So you sit there and think about this. Some parent goes out and buys a DVD or a CD….with twelve Sesame Street tunes on it. They give it to a 4-year old kid, and he plays it over, and over, and over. Figure twelve continuous hours of the same songs. Repeated the next day. Repeated for a week or two. Repeated for a month or two.

What’s the difference between the wretched parent who innocently allowed the kid to lose his mental capacity, and the interrogation guy at Gitmo?

Well….there is no difference. Yep, over the past two decades, with the arrival of CD/DVD players, and vast volumes of music….we’ve become very acceptable to friendly music….used for various purposes….including evil purposes.  Kids are being brain-washed and broken down.   We are developing the next generation....the mushy generation.
at Saturday, June 02, 2012 No comments: