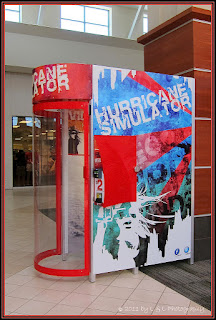 I'm often amazed by gadgets.  This week, I came across two unusual ones.  First, it's the hurricane simulator at some local mall.  Basically, you pay a buck or two.....and this turbo-fan turns on at 10k RPM (my humble guess), and you have locked yourself in this plexi-glass area with air thrusting down upon you.

So for a minute or two....this fan is blasting away at you....at hurricane speeds.  You apparently feel thrilled, and happy over the whole experience.

I stood there for five minutes....hoping some idiot would walk by and put some cash in....so I could watch the whole thing.  Personally, I felt it was probably a good idea on paper, but as a business application.....it just isn't something that would sell to folks.

Course, if I were in some small podunk town in Bama.....and put one of these up....there would probably be this rush of sixty folks up to feel the thrill, and then.....the whole thing would max out after four weeks. 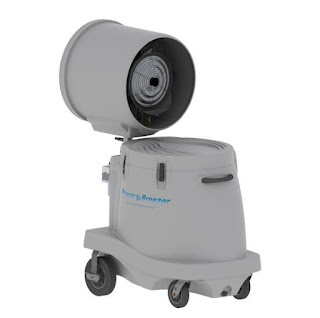 As for the second gadget?  Well....at the Pentagon, the boys out front.....the security crew....have this new "toy".  It's a Power Breezer.  So what you do is load this tub up with water, and then this fan comes on and dispenses "misty winds".

The tub?  Well....I'm guessing between 40 and 50 gallons.  The fan is fairly decent and I'd be guessing you could cool-mist up an area of 200 square feet in twenty minutes.

The principal here....is evaporative cooling. It's the same thing you do in Arizona.....in a dry climate.  This gadget would work fine as long as the humidity is around twenty percent or less, and the temp's stay less than 95 degrees.  Around Louisiana.....I doubt if it'd be any serious impact on your cooling.

I would say this though.....if you have any metal devices around where this is running twenty-four hours a day.....rust will develop fairly fast.  I'm not going to be negative about this.....but there are certain places this might not be appropriate.
at Tuesday, June 26, 2012 No comments: