"But the nature of this office is also to tell a story to the American people that gives them a sense of unity and purpose and optimism, especially during tough times."


- President Obama in response to a question by CBS


It was one of those odd moments where a guy is trying to explain why things haven't gone well during his reign at a company, an office, a newspaper, or as President of the United States.


There are a dozen Presidents who captivated the public with optimism on a daily basis...from Lincoln to Roosevelt, onto Reagan, and even to some degree...President Clinton.


After a bit of pondering....I think I'd be safe in saying that we are traveling down the road in a car that runs on optimism-lite.  Once in a while....we will hit a point where we get a slight surge in optimism but it's nothing really to brag about.


The President might be right about this optimism-lite situation and maybe he has some fault...but if it's true, then what?  Is there going to be a full month of four-star speeches given now....to bring back to where we should be?  I just don't see that happening.  You can admit anything you want....but we are kinda locked into optimism-lite for the foreseeable future.  And I wouldn't get that pumped over a Romney era changing that.

The Pool in New York

There was this urban pool in New York City...McCarren Park Pool....which had stood in decay for roughly three decades.  The city found fifty million, and renovated the pool, and it reopened this year.  The picture from 2006 says alot about the area, and the emphasis that was put on the pool.

Everyone talked about fixing the pool and getting things back on track.  So the political folks stood up and put the cash into the project.

So you gaze at the 2012 picture, and you kinda think that things are turned around and really improving.  But that feeling is bogus. 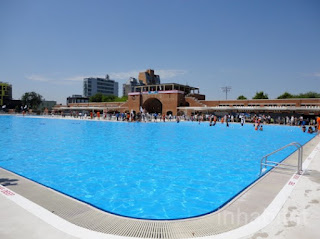 As summer arrived and the heat came into focus....the public started to prove why investing the pool was worthless.  From the New York Post....at least three folks are tossed out of the complex on a daily basis.  Sometimes....a complete brawl will just start up at a moment's notice.

Cops?  Yeah....they have to have cops continually around the pool because no one will will listen to the lifeguards....which gives you an idea of the customer mentality.  Five or six cops?  Well....no. On the big days....there's around forty cops which maneuver themselves around the entire complex.  You can figure at least $15k in security-related costs.....to keep the complex safe....as a minimum....on a daily basis.

Feces in the pool?  Well....yeah.  They tend to shut the pool down on a regular basis, from fifteen minutes, to an hour.....to clean the mess.

The odds here?  Public health officials will start to show up next summer and I imagine that it gets shut down at least two days a week for a full-up cleaning.  Toss in a couple of potential riots, and some city council people will eventually talk about the operational costs of the place.  My safe bet here is that they shut the complex down by 2017.

Fifty million tossed down a sewer, and no one really cares.
at Sunday, July 15, 2012 No comments: