The Debate of Debates

Earlier in the week, I kinda noticed the announcement from Fox News that O'Reilly was going to debate Comedy Central's Jon Stewart.  It's a charity deal to some extent....roughly $5 to get the debate.  It'll be run from here in the Arlington area at the local university.

While the major debates between Obama and Romney will mean something....this Stewart versus O'Reilly debate might actually mean the movement of 500k votes in one direction or the other.  I'm guessing that a major number of college students will pay attention to the debate, and that both individuals might get a point of significance into the discussion.

The chance that O'Reilly might win the debate?  Zero.  The chance that Stewart might win?  Zero.  I expect a fair amount humor to be displayed and some serious questions to be left out for people to think about for the remaining campaign.  The truth is....probably half the college students in America could be persuaded to lean over and go a different direction in November.

So this comical debate might mean something in the end....which is sad in a way.
at Thursday, September 20, 2012 No comments:

This is what we know.

There's this Iranian Muslim Mullah of a lesser degree.  He's up on all the rules, and probably up in his sixties.  He's walking down the street in this town....Shahmirzad....out in northern Iran in the past month.  Somewhere out of the corner of his eye....he spots this gal walking toward him and really not covered up in the appropriate Muslim way.  Women just aren't supposed to display nothing.....while walking in public.

Well...our guy shouts out to the gal that she needs to bundle up more....ensuring men don't see any portions of her body.  She shouts back to him that he just needs to close his eyes.

Course, you can imagine a moment like this.  He's all focused now on making sure she gets corrected like a regular Iranian woman is supposed be.

Well....this Iranian gal doesn't take "corrections".  So this encounter turns into an interesting episode.  The gal approaches him, and starts to push him back on his heels.  Course, he's an older guy and not that stable.  So he starts to fall backward and onto the ground.  The gal ain't finished with him.  Apparently, she starts to lay in on this guy with her shoes.....kicking and kicking on him.  He probably hasn't been this kind of episode in his life.  He admitted later, it was the worst day of his life.

When this was all over with....the Iranian Mullah guy was in the hospital for three days.  He's upset by this behavior.  Course, she was kinda bundled up around the face to some degree....so he isn't likely to be able to identify her, and this turns into a comical sort of situation with his reputation now in question.

Now, you'd think on this a while....since it got out in public media, and there's probably fifty thousand Iranian women who have read the story and feel pretty positive over beating up this Mullahs.

At the end of the day....it might be worth it to just avoid criticizing Iranian women, if you ask me.
at Thursday, September 20, 2012 No comments:

The Pirate and the President 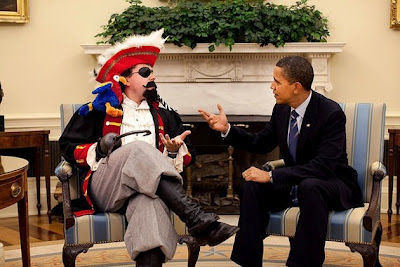 This is not a doctored photo....it was actually taken yesterday, with a public meeting between the President, and a pirate.

There's a few captions I could think of....but it's just not worth the effort.

In the heat of an election.....this is probably not a photo that you want to have taken or put into the media spotlight.
at Thursday, September 20, 2012 No comments: