Smelling Trouble a Mile Away 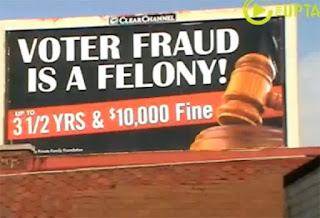 Thirty years ago....you never brought up voter fraud, and no one ever mentioned it on TV or the radio.

Today....we've all heard the comments.  Most of us don't know anyone....who'd be that stupid.

How bad is the problem?  You just don't know.  Over the past eight years...you have a couple of cases which pop up.  Several folks have gotten jail-time (they were shocked just how serious this is taken).

Some folks feel that it's nothing much to worry about.  The problem here is that folks have free time, and databases that they've forced the county clerk to hand over.  So they spend weeks analyzing columns and eventually find a dozen guys in their town....who are registered a state over, or a county over.  They call the prosecutor....and this turns into a mess.

My prediction is that hundred of folks will be looking over data and find at least five hundred folks who were double-voting.  By the end of January, the authorities in various states will be asking folks to come down and explain some issues to the local judge.  Your cousin will suggest paying off the local Democratic judge, or rigging up a $2k bag of money for some Republican prosecutor ....to get out of trouble.  Grandma will be praying for you.  And your uncle Karl (life-long Democrat), will ask how you could be that stupid?

The sad thing is that the last thing on your mind in 2016....will be voting.  You probably will never vote again.

The "Peace in Our Time" Opera

There is this moment of history...in 1938...where history played out like a opera.

With various tensions in full swing around Europe, and the likely attack by Nazi Germany to take Czechoslovakia because of the German citizens who resided there....the threat of war existed.

England was greatly worried, and newspapers continually pressed on the terrible woes of such a grab, and how war had taken the great will of England back twenty years prior.

So the Prime Minister....Neville Chamberlain had his staff work up a treaty of sorts, which would prevent war from coming.  The Munich Agreement would bring "peace in our time" (the catch-phrase for Chamberlain at the end).

The deal was that Nazi Germany would agree not to invade Czechoslovakia.  In mid-September, Chamberlain was invited to the Eagle's Nest in Bavaria, as the place where he and Hitler would discuss this matter.

The Eagles Nest....if you've never been there....takes a bit of driving from the local town....winding roads and up mountainsides.....to reach a point where you have to enter an elevator.  You rise up to the top of a mountain, where a stone "cabin" of sorts exists.  The cabin....the size of half-a-basketball court....has these huge windows which look out across a vast range of mountains.

If you were ever wanting a place to impress and press someone....the Eagles Nest is such a place.

For roughly three hours....Chamberlain and Hitler talked and talked.  Near the end....there are various signals that Chamberlain came to realize that nothing much was ever going to be agreed upon between the two.

Over the course of the next two weeks...various talks were held by various players in this whole effort to prevent war in Europe.  It became a comedy of sorts because it was mostly a press affair where each side would mouth off over the terrible threats, that war was terrible, and that peace could surely be reached.

Course, neither Nazi Germany or England ever involved Czechoslovakia to any degree in these talks....the nation that was to be affected.

Naturally, you'd ask questions here why the chief country under the threat was never actively part of the opera.

On 30 September 1938....Chamberlain was again in Nazi Germany, and finally worked out a meeting with Hitler where Munich Agreement was finalized.  Chamberlain flew back to London to huge crowds who clapped and approved of "peace in our time".

Within sixty days....it was apparent that the Munich Agreement was worthless.  The trigger to the war was set into motion.

By the spring of 1939, Nazi Germany had invaded Poland to expand out on their strategy.

In the spring of 1940....Neville Chamberlain resigned as Prime Minister.  Six months later, he died of cancer.

On the whole of things....Neville Chamberlain ended up looking like an idiot....simply a stage prop for the Nazi apparatus in 1938.  For any positive thing you could say out of the career of Chamberlain....it's mostly zeroed out after signing the treaty.

The stage is quiet now, and the curtain is falling upon a darken stage.

Around noon today...the New York Times finally conveyed it's private news gathering efforts....that a treaty is about to conclude between the US and Iran over the nuclear episode. The White House tonight denies any deal is in the works.

The sad thing here is the Times is rarely if ever wrong on the information it gets from it's operatives in the White House.

My humble guess is that we've become 1938 Britain, so worried about the previous war, that we'd conclude just about any deal....to bring "peace in our time".  And in the end.....a nifty opera is the only way to tell some sad woeful tale.
at Sunday, October 21, 2012 No comments: