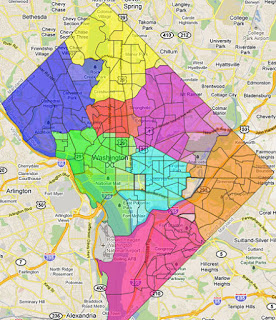 This week....folks got a bit hyper down in ward eight of DC.  DC, for those of you who aren't into the divisions of the district....is the lower point on the district (in purple), and considered the 'poor area' of DC.  In this area of two by four miles....the last grocery gave notice that they intend to shut down.

Folks in ward eight are a bit angry over this....you now have to leave the neighborhood....maybe by car or bus or subway....to find a grocery.

Chief reason?  The political folks won't say much about it and the folks who live in the ward won't talk about it....but if you opened up a grocery....you tend to have problems with shoplifting and local crime.  You could post two or three guys in security-type uniforms in the parking lot and around the building....and it really wouldn't matter.

With 70k people living in ward eight....you'd think that some guy would see a huge opportunity and open up a Piggly Wiggly-type operation, and clean up in five years to retire.  So far, no one really cares to take that kind of risk.

The funny thing about this last grocery?  Well....they opened in 2010....with DC grant money (free money).....in the range of $900k.  Yep, almost a million in grant money to just open a simple grocery in a simple neighborhood.  Yet, it could not sustain itself.  Where did most of the grant money go?  Some folks think it went into the location....with a fancy parking lot that was difficult to get into....that was not really friendly for folks.

It's amazing to me....my old home area in Bama....less than 5k in the local region, and there's this Piggly Wiggly operation that makes a pretty fair income....nothing fancy, no cops, and no shoplifting.  And yeah, they take food stamps.