This is an odd story.

Over in the southeast part of DC....where most folks would prefer not to live, there is a decaying neighborhood.  It was recognized as such back in the early 1990s.

The DC city council decided by the late 90's.....that perhaps a HUD deal could help remake the area, and make it more presentable.

As the money rolled in around 2002, you would have thought that a project manager would have been appointed and personally watched over the investment and the expenditures....getting data and bills to show where they spent the money.

Well.....it appears that no one much ever monitored the $28 million.

HUD is asking stupid questions now.  They want evidence on how the money was spent.

The city of DC says that most records are gone, and that they were all split up among several departments....not one location, which just adds more speculation onto the management of this $28 million dollar grant.

This week, HUD basically gave the city six weeks to find records and settle this mess.  I'm guessing that the city council is just sitting there.  They don't know nothing, and can't prove nothing.

The end result?  HUD could get a federal judge involved and just demand the city pay back the whole $28 million...period.

The results from the $28 million dollars?  Well....that's another item of interest.  No one much talks about it but the neighborhood is likely no better or worse than it was in 2002 before it got the money.  Maybe there's a new paved parking lot.  Maybe there's a million in fancy landscaping sitting out there.  But frankly, it's hard to say.

The funny thing about this whole story....if the city had hired one project manager, and just said this is it....no other work and responsibility.....just track what goes on, and keep a copy of everything you spend, then none of this would be necessary.  One guy.  And the city wasn't even competent to hire one such character. 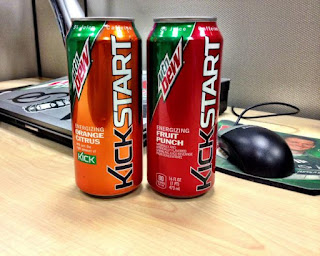 The Dew guys decided it was finally necessary to have a Dew breakfast drink.  Yeah, it's around in a 16-ounce can.  It has around twenty percent more caffeine than a regular Mountain Dew.  And there's a little bit of fruit juice in it.....enough to claim it might be marginally healthy for you.

My Bama sense kicked in, and to be honest.....given a choice....I'd just as well prefer a real Mountain Dew with a pair of pop-tarts for breakfast, than switch over to KickStart.

My humble opinion?  It'll sell, and eventually....some guy will crank up MAX KickStart, which will feature double the current amount of caffeine in it.
at Tuesday, February 12, 2013 No comments:

And God spoke out to Joe, Fred, and Barney.....because of expenditures.....your tithe allotment must increase across the board for those who make $200k or more, from ten percent, to eighteen percent.

God spoke of the necessity....of those who have more....to give more.

Blessings don't grow on trees....was the phrase that God used in delivering his words.

Joe, Fred, and Barney sat there for a while.

Eventually....Joe...who typically made $280k a year....running a used-car lot on the west side.....decided that eighteen percent was fair.  Joe spoke of the wisdom of fairness.  It was twenty-five words of wisdom, but that was enough...in his mind.

Then Fred spoke up.  Fred wasn't happy.  He asked if God was really being wise in upping the tithe situation.  Fred had employees, bills to pay, and an ex-wife in Tulsa.  Fred felt that fairness....was not really a virtue that was listed high in the Bible.  In essence.....he felt that God was wrong.

What exactly was the church doing with the tithe money right now?   Where were the expenditures?

God stood there.....more in a confused moment, than the all-powerful moment.  Typically, folks don't go around asking God stupid questions.  God decided it was best to say nothing.

Barney wasn't going to sit down or shut up.

So Barney laid into God.  Are you spending tithe money on losers?  Are you paying people in the church to do nothing?  Are you sending church folks off to conferences in Las Vegas?  Are you allowing the church management to buy expensive cars?  Are you putting fancy glass windows into churches that eat up capital investment money? Are you paying $20k a month to get four hours of TV time on the local TV station?

God was getting a bit shaky here.  You could tell....this wasn't the regular kind of church-going guy....Barney was sitting there and observing a bunch of stupid spending habits.  Barney was simply not going to hand God more than ten percent....end of the story.

The morale of the story?  In two thousand years of running modern civilization and society....God has done a fair job on church taxes....with ten percent being the "norm".  Somehow, churches have lived within their means.
at Tuesday, February 12, 2013 No comments:

I sat in McDonalds this morning for around fifteen minutes.

There was this short piece on the news, and I watched in fascination.

Basically.....the Superintendent of the Chicago Police Department was literally begging the media to stop call city policy on guns as "strict".

It was a comical moment.

The truth?  Well....compared to 1,000 other cities, and forty-nine other states.....they have the strictest gun laws in America.  The only city....with tougher views on weapons....is Washington DC.

He may not think his laws are strict, but comparably speaking....it's on the strict side.

I'm guessing each evening....he has some idiot talking to him, maybe from Phoenix, or Miami, or Dallas, and they also talk about Chicago's tough gun-laws, and it just drives the guy nuts.

A smart reporter in the room would have fired back....would you like to make your current tough gun-laws tougher?  That would have got him going.

The truth on the street?  You can write 50k pages of tough gun laws, effective tomorrow morning.....and folks will just go out and buy a pistol which easily violates the law.  You can't legislate guys from breaking the law.  It is that simple.
at Tuesday, February 12, 2013 No comments:

The False of a False Premise

"It's almost a false argument to say we have a spending problem. We have a budget deficit problem that we have to address."

I sat there for a while and just looking over the quote by Representative Pelosi....spoken at a Sunday political chat show.

It's like your cousin Karl, who has a $60k credit card debt situation.  It was free money, a great seven trips to Vegas, and someday....maybe twenty years in the future....your uncle would pass on and feel sorry for you, and leave you $60k to suddenly pay off the debt.

Or, it's like your neighbor Jimmy, who bought the $400k house four years ago with no down payment, which is today only worth $250k.  Jimmy works hard and today pays almost $2,200 a month.  He knows he has a deficit problem but if he ever fails...doesn't matter, the bank will be stuck with the stupid house anyway.

A smart reporter would have come back and asked Nancy....what is the magic number of debt to admit that you do have a spending problem.  Nancy would have grinned and just passed on that entirely.

A smart reporter would have sensed the moment and asked if it was a false premise to associate spending with debt.  Economic logic would have failed Nancy at that moment.

A smart reporter would have asked if a balanced budget at any level....for regular people or a government....even mattered.  Nancy would have had a tough time to respond to that.

Here's the thing.  After watching political idiots appear on TV constantly....you get to a point of suspecting it's all a political reality show and built just for your entertainment.  No real politician could walk around and say things like that.....right?
at Tuesday, February 12, 2013 No comments: